A few of us have talked about going snowshoeing or cross-country skiing for a couple of years and we finally did it! We decided to start off easy by trying snowshoeing first and going to Royal Gorge, a designated cross-country snow park with good trails and where we could rent all the equipment. Here we are all geared up and ready to go. 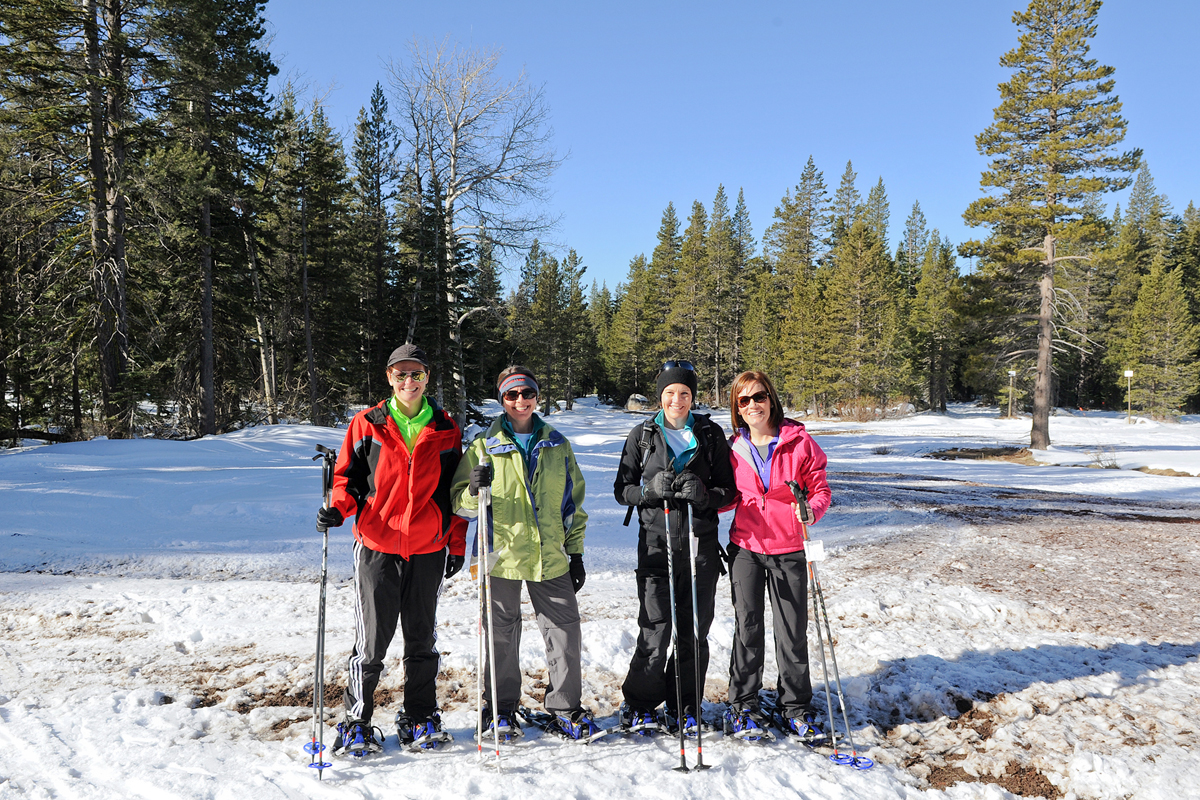 The snow was pretty sparse in some places but there was plenty for snowshoeing from the snowfall last weekend. We knew this might be our last chance. 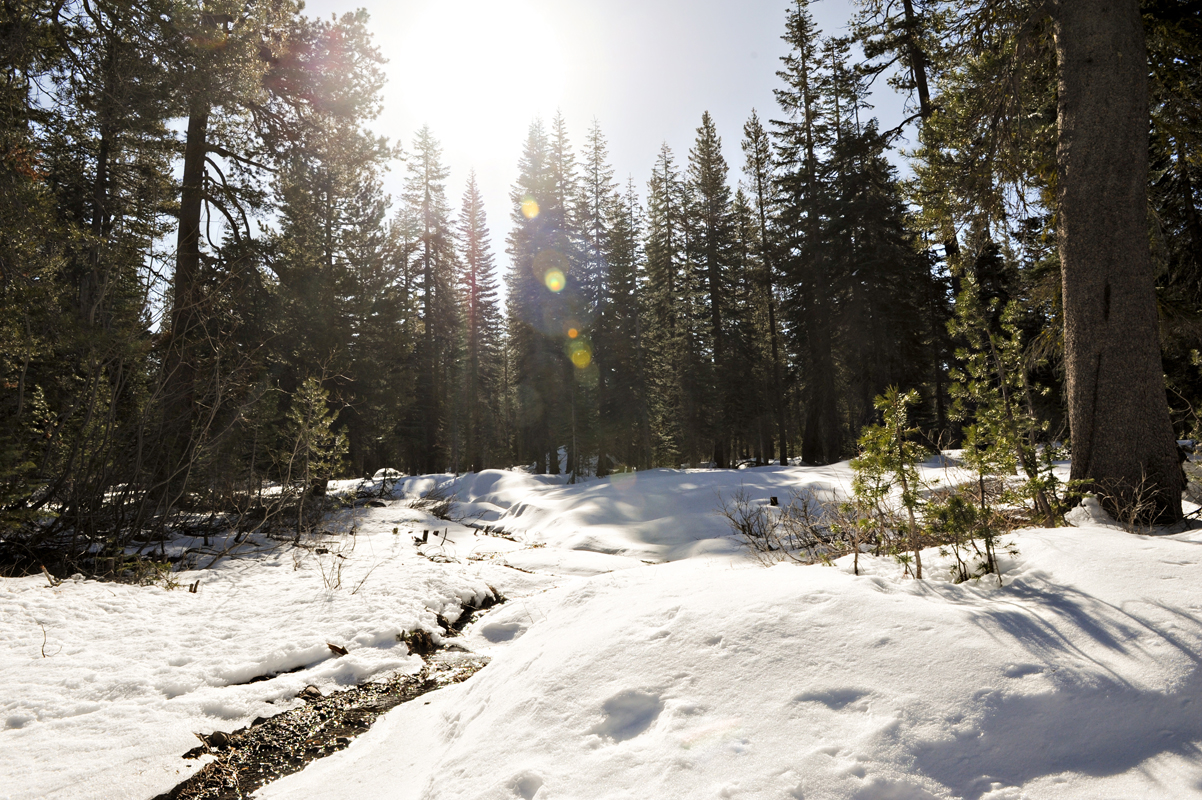 On the advice of one of the workers, we started off on the Palisade trail headed towards Lyle's Lookout. Another worker told us we could go from there and cut cross-country up the slope to the Palisade Peak warming hut. Hmm, okay, not sure about that but off we went.

We made our way along the groomed trail as we got used to walking in snowshoes. It was super easy to learn but not always easy to feel totally coordinated. We won't mention how many times we had little trips and falls because of stepping over our own feet. We also learned that snowshoeing is kind of noisy. Lots of crunching as you make your way over the snow, compared to cross-country skiing which I would imagine is much quieter as you glide. Anyway, here we are at Lyle's Lookout. 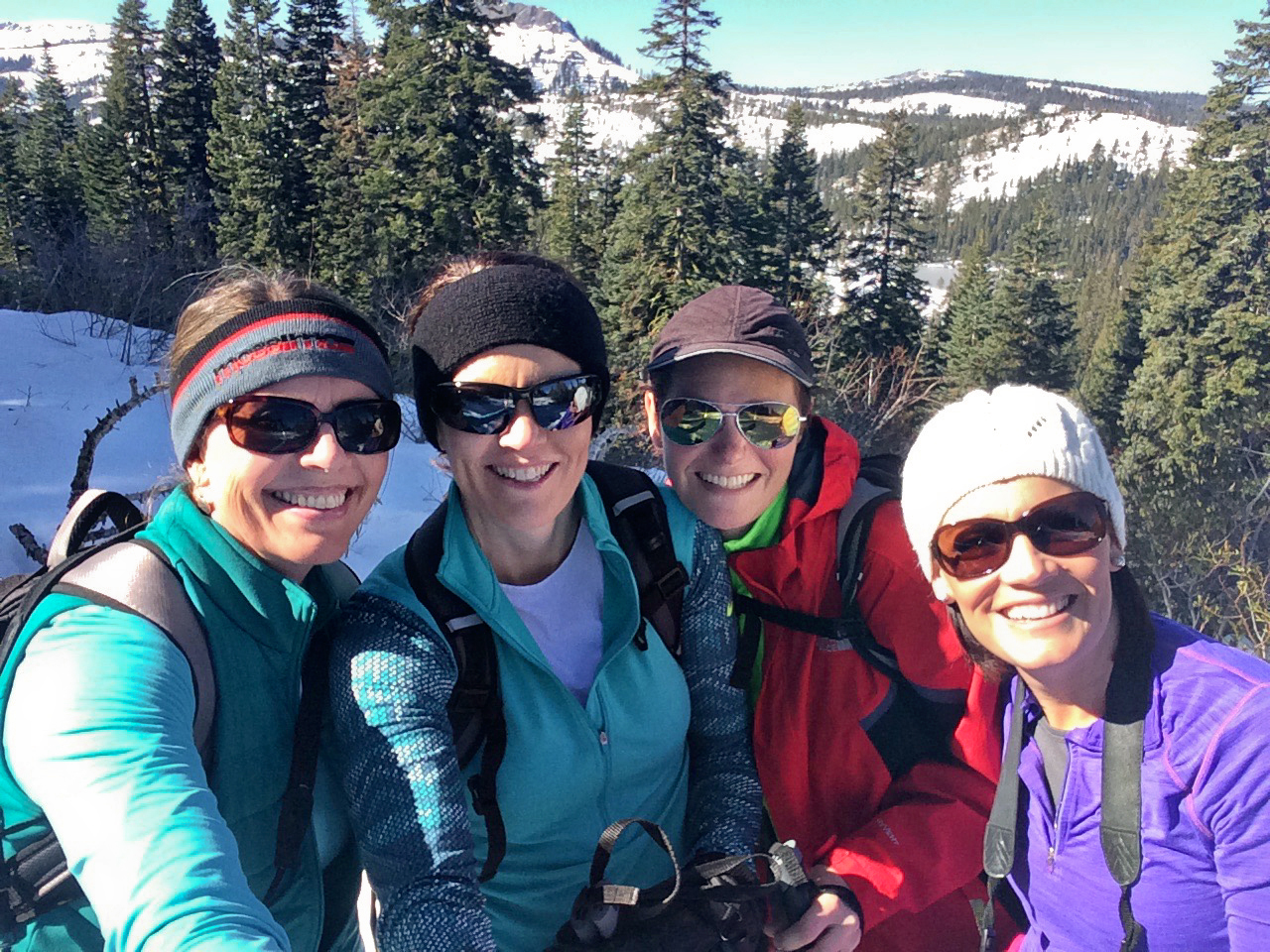 Off in the distance is Devil's Peak, which I've climbed almost to the top, but that's another story for another day. Let's just say that it is aptly named. 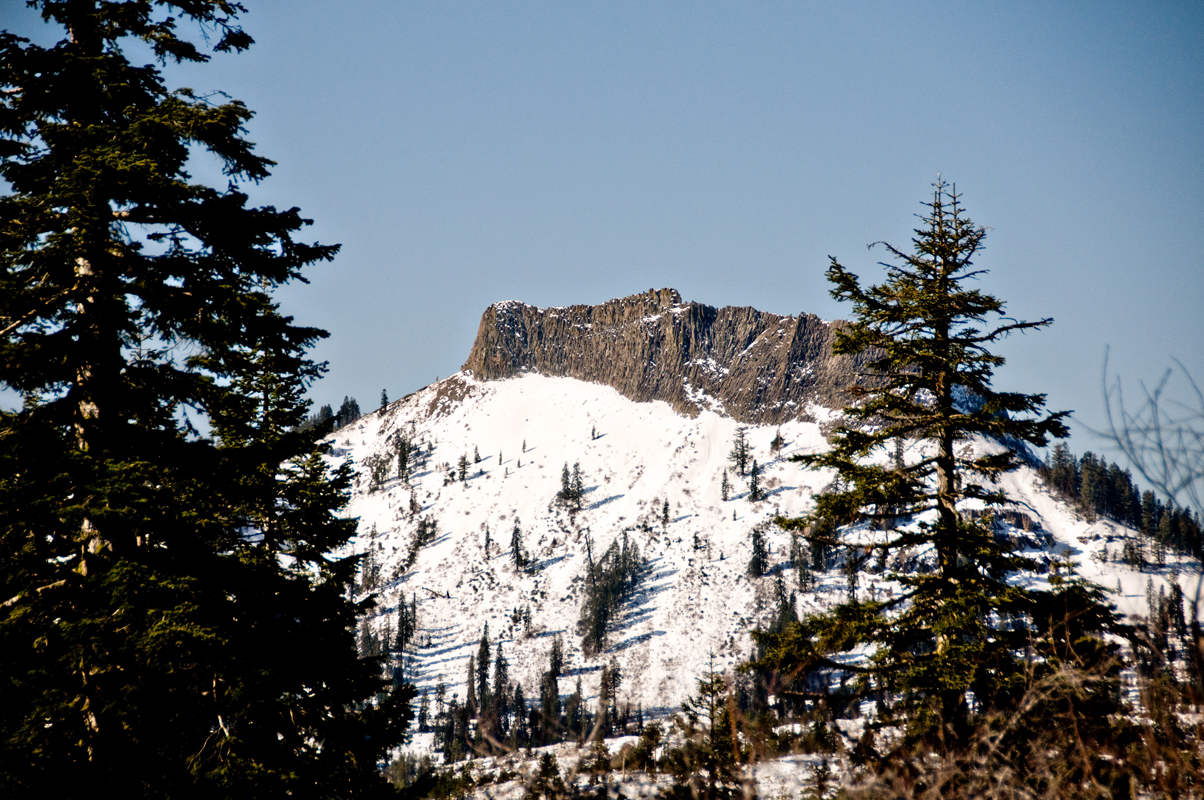 After Lyle's Lookout, we got to a fork in the road and had a decision to make. Should we follow the advice of the guy who said we could just go cross-country up the hill to get to the warming hut? I'm always in favor of climbing a mountain, and the view looked pretty great, so we all decided to go for it. We thought momentarily about the possibility of getting lost, but we all felt confident that it would be super easy to follow our tracks right back down if we needed to. 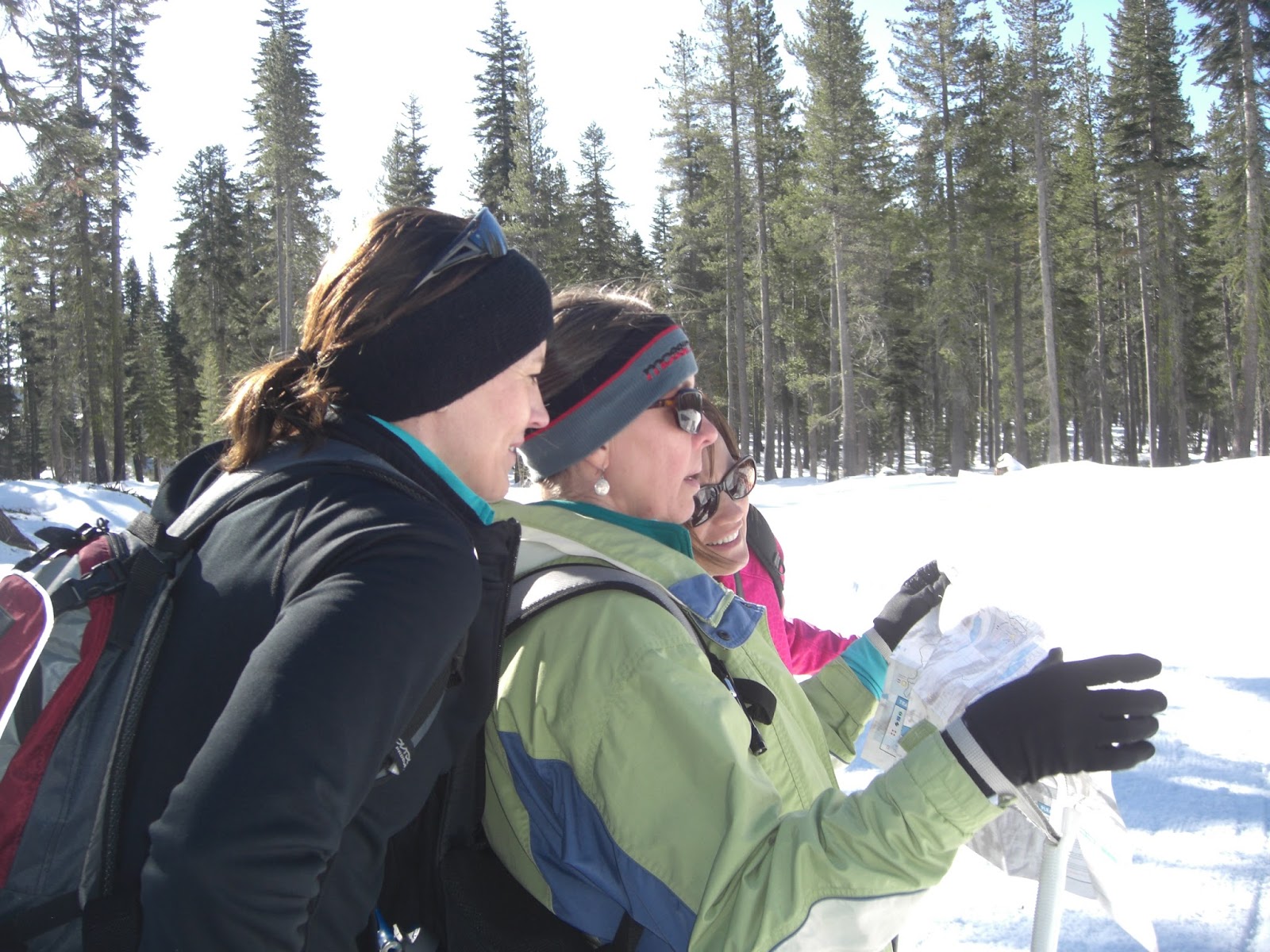 We quickly learned that snowshoeing through deeper snow is sort of like walking through piles of sand. 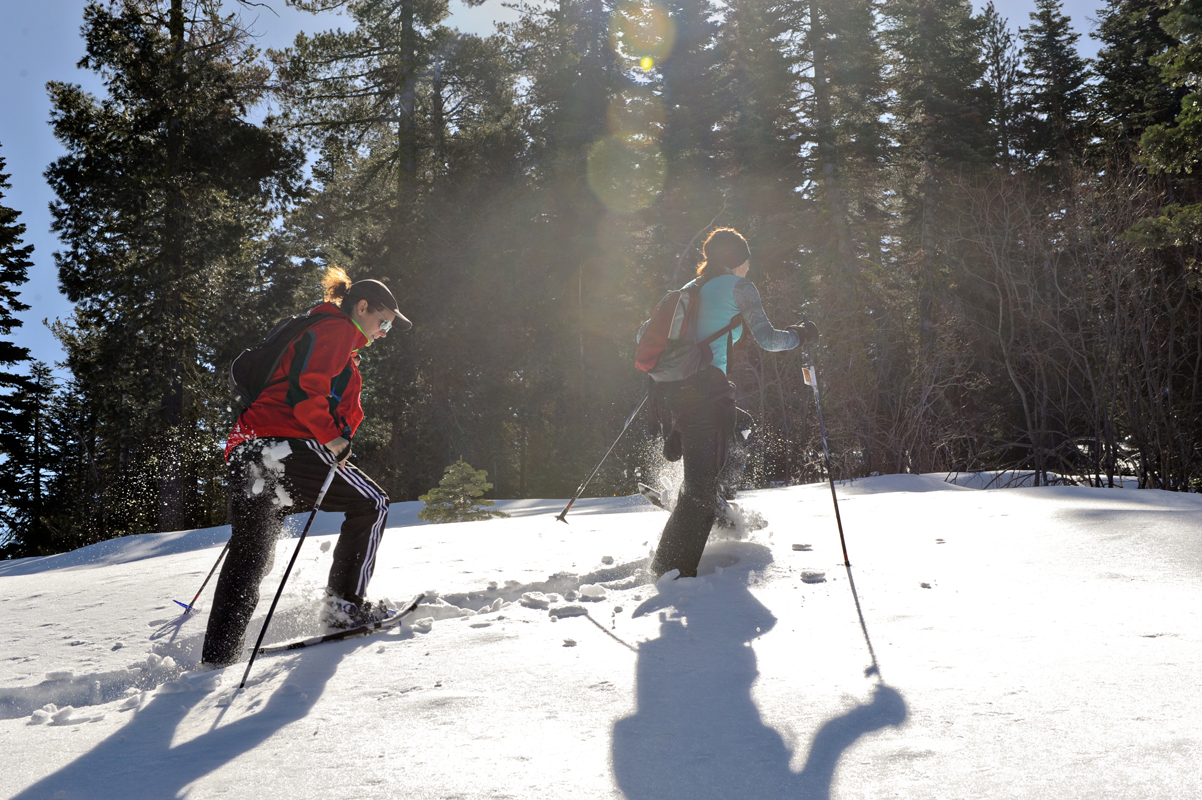 But it was also a fun, challenging workout... 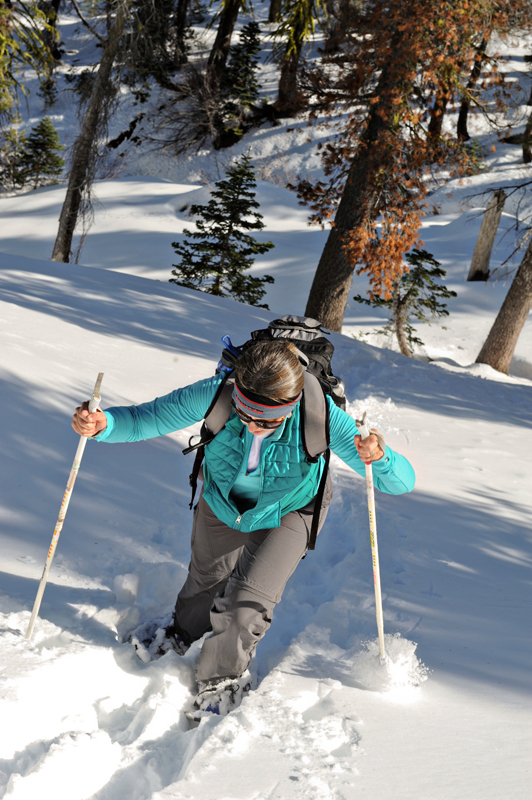 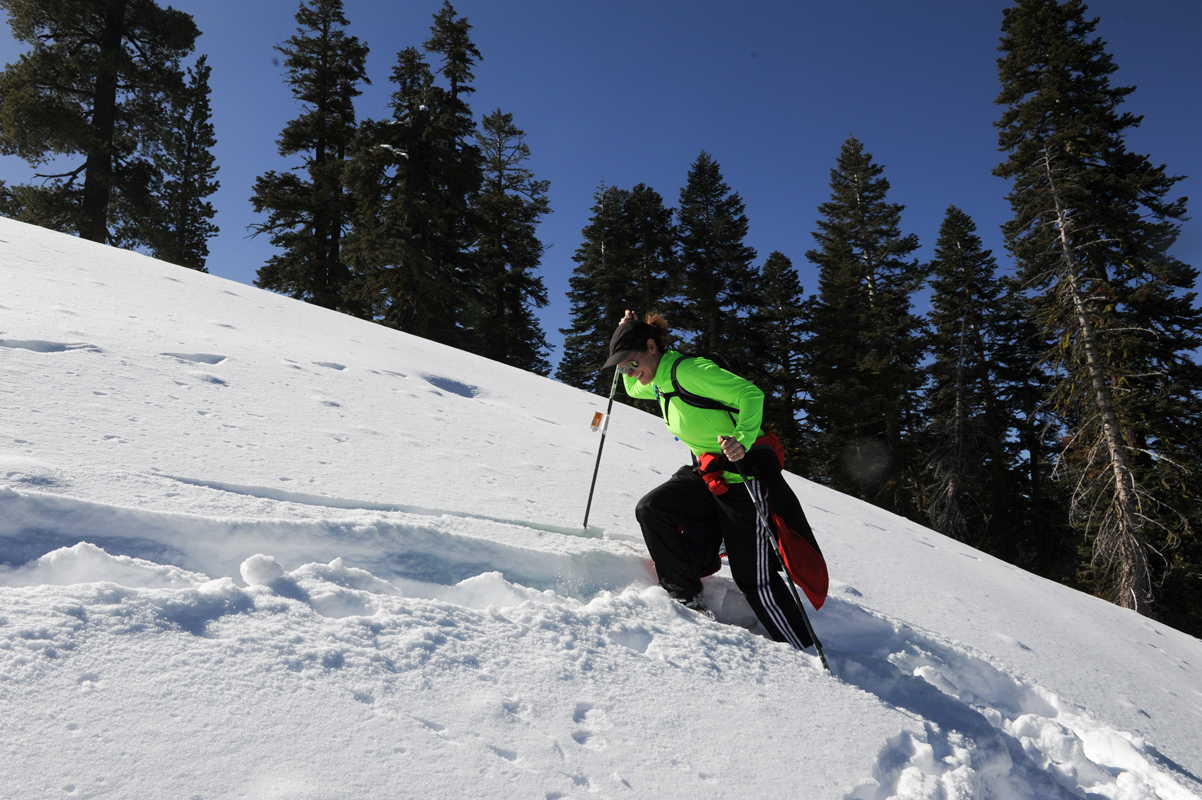 We thought for sure we had to be getting close to the warming hut because it didn't look that far away on the map. 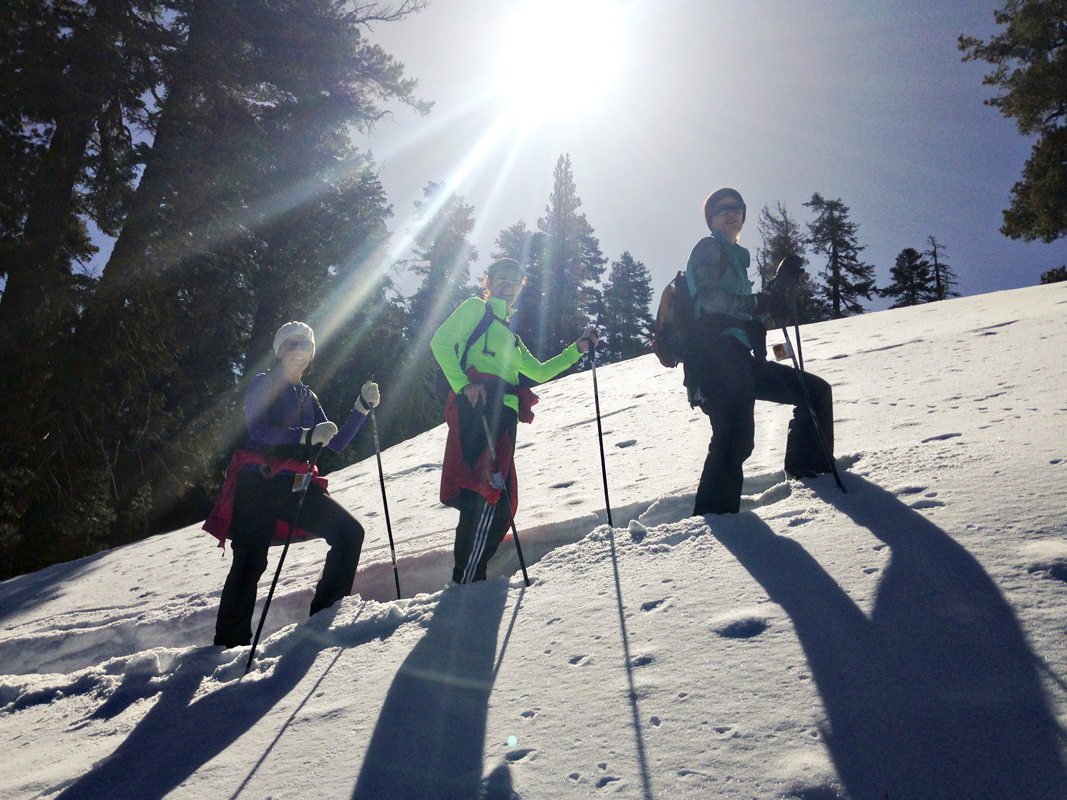 But after making our way pretty far up the hill/mountain, we figured we probably overshot the destination of the warming hut and had climbed up higher all the way to Palisade Peak. There was this one section that was fairly steep and I realized later that we should have also thought about the possibility of avalanches. It didn't occur to any of us at the time because we relied on the advice of the worker who told us to go up that way. I've done some reading about avalanches since then (scary stuff!), and I think we were in a place that was okay, but I wouldn't do it again on that kind of a slope. Live and learn! We did make some cool zig-zag tracks though and we enjoyed an amazing view! 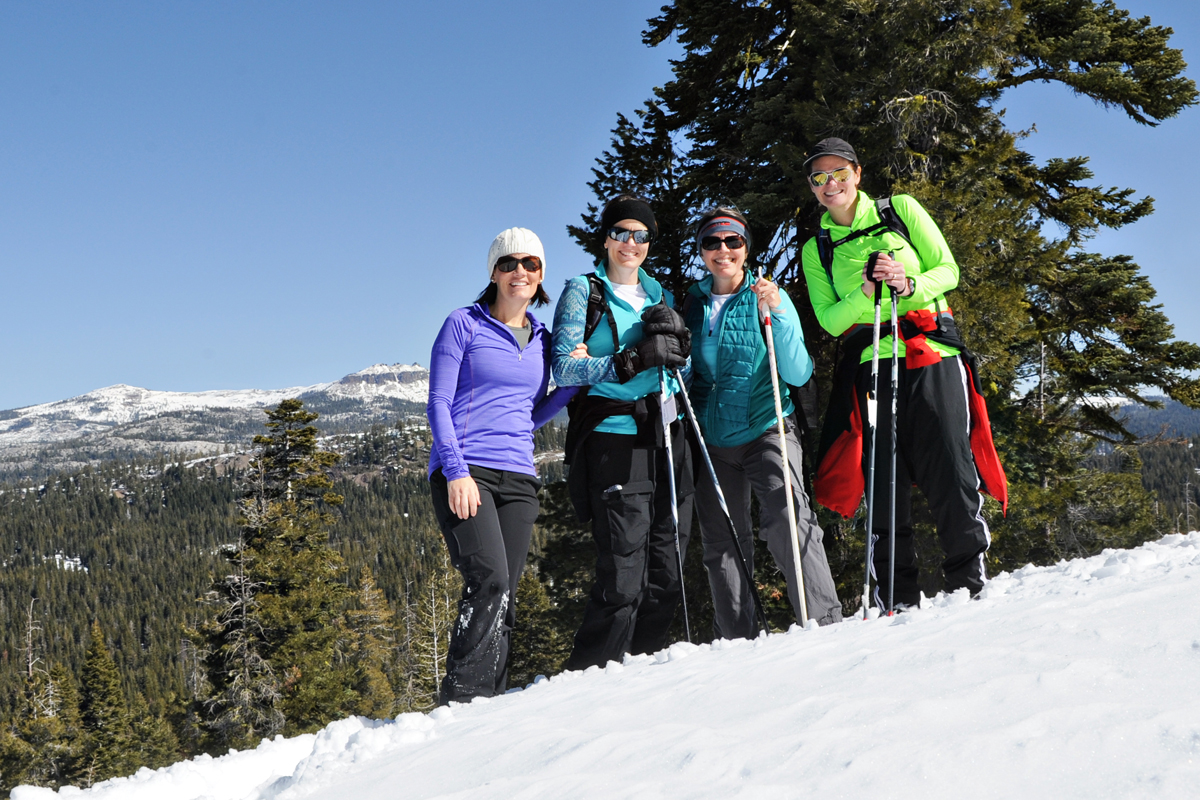 We retraced our steps and headed back to the lodge. Man, it felt great to sit down and give our feet a rest! 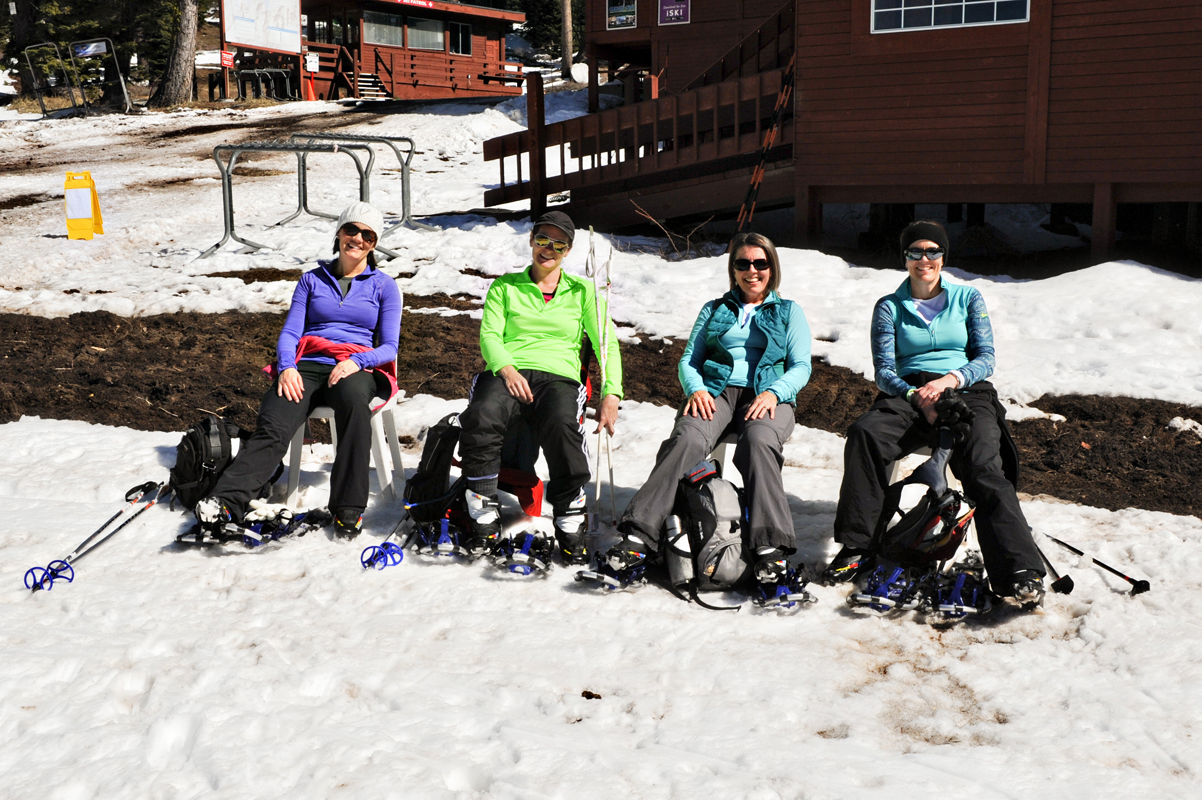 Lunch was well-deserved too! (Snowshoeing burns about 400 calories per hour on a flat, groomed trail and about 800 calories going uphill in powder, woohoo for us!) 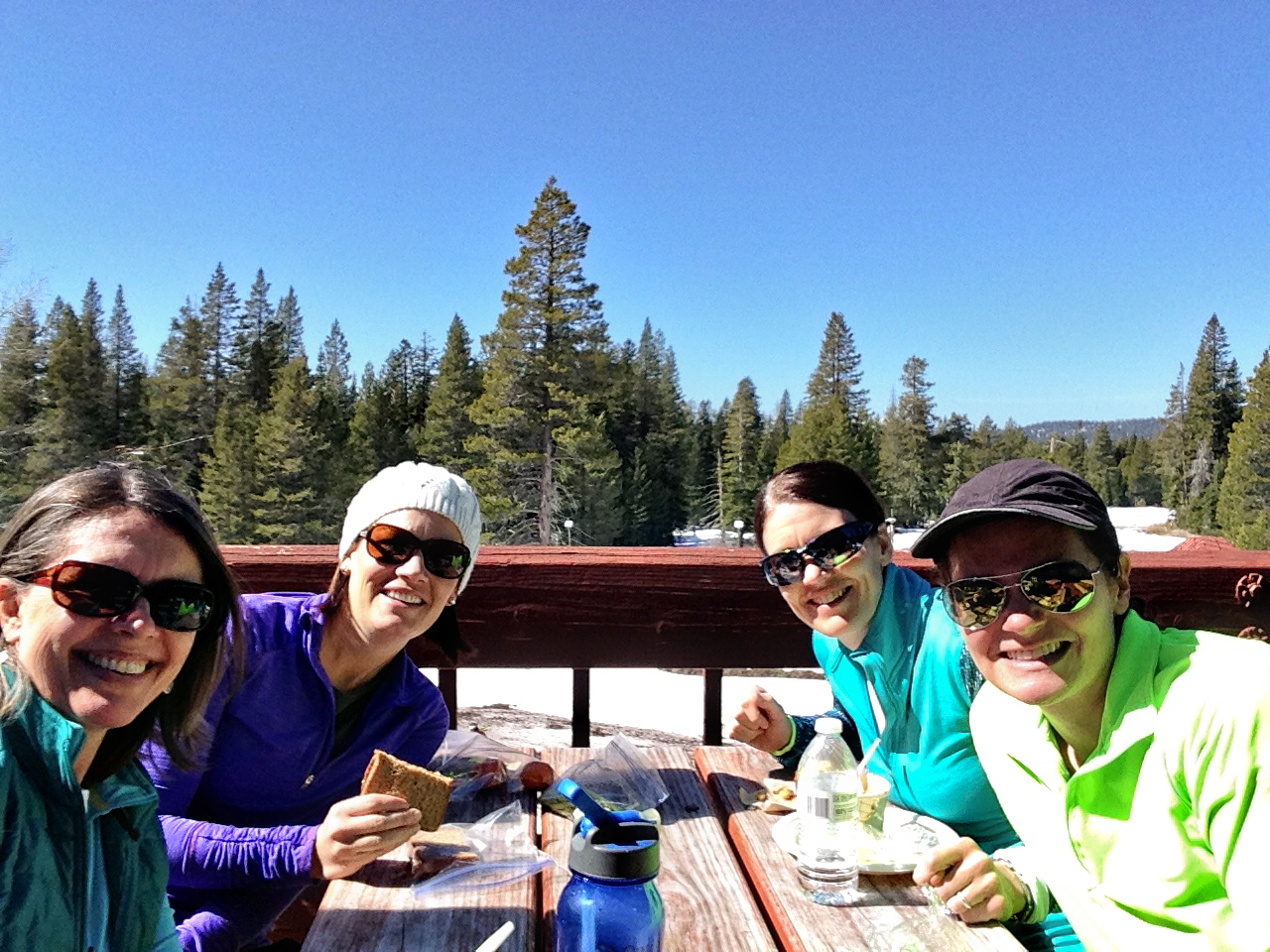 Such a fun day with these friends who were willing to let me drag them along on a new adventure! 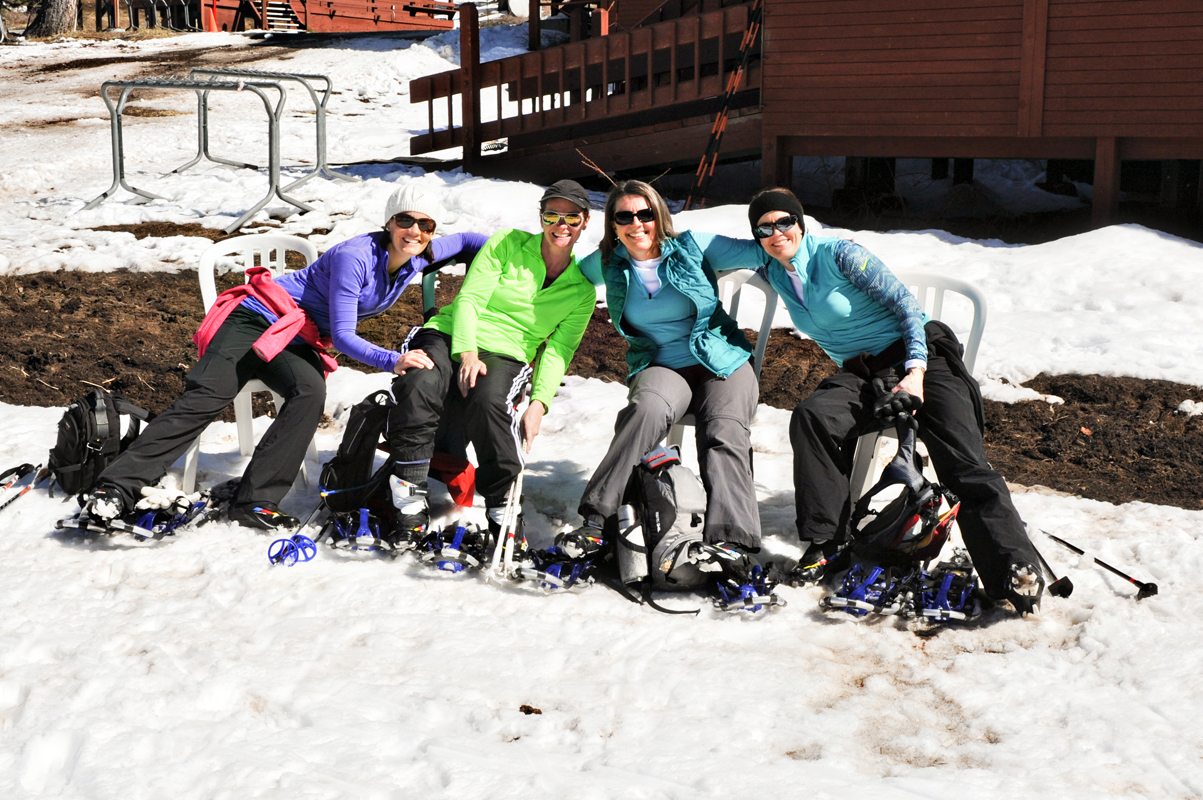 Here are some resources to learn more about snowshoeing:
Snowshoes.com
Snowshoe Magazine
(bet you didn't know there was such a thing, right?)
Snowshoe tips from REI

Poem by Rene Daumal (this is why I hike!)

One cannot stay on the summit forever-
One has to come down again.
So why bother in the first place? Just this-
What is above knows what is below.
But what is below does not know what is above.
One climbs, one sees-
One descends and sees no longer
But one has seen!

There is an art of conducting one’s self in
The lower regions by the memory of
What one saw higher up.

When one can no longer see,
One does at least still know. 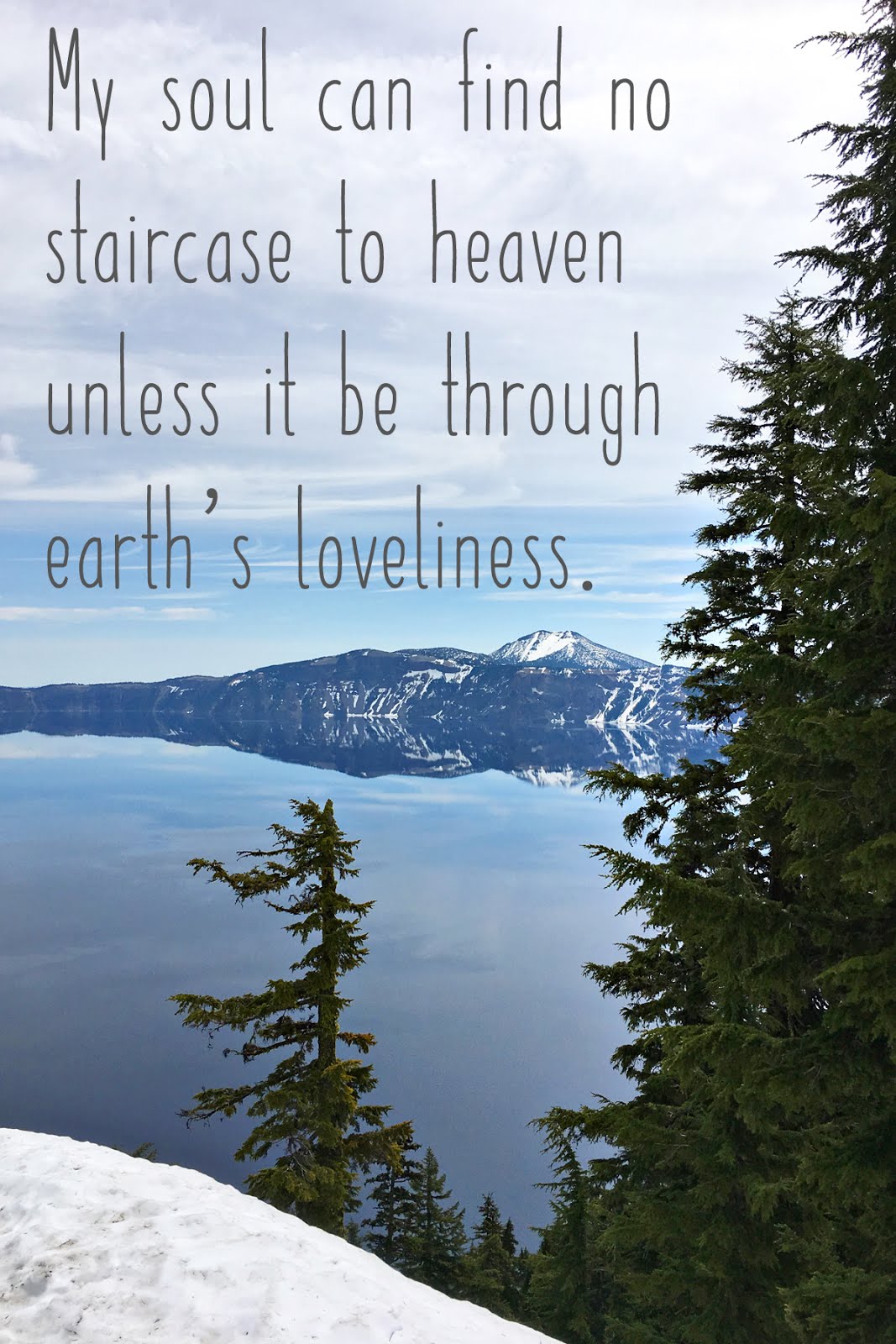